Thank you for all that you do Dusty! 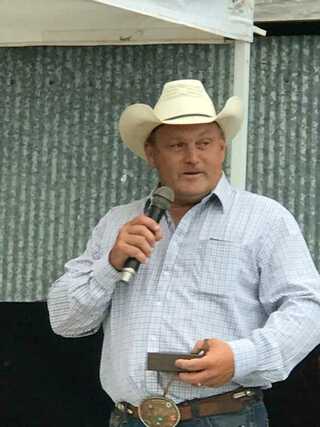 ​Many in the “know” have commented it is past due the C.M. Russell Stampede be dedicated to Dusty Solomon. Five years ago Dusty ended an eight-year term as president of the Stampede Club. For eight years he was instrumental in leading the group responsible for planning, presenting and paying for the annual rodeo. His leadership proved successful on all accounts.

Dusty was born and raised in Havre, one of Jack and Patti Solomon’s three children. The family has been ranching as far back as anyone can remember. Dusty happily recalls the days of helping his grandparents, Ed and Dorothy Solomon, feed, gather, and doctor cows – all of those chores ranchers have in common. Although the hour was typically early, he never minded the work, thoroughly enjoying riding through the cows at his dad’s side.

It wasn’t all work either. Dusty is an avid horseman, and he and his dad also shared the fun of roping, a training that eventually proved a boon for the young man. Jack Solomon enjoyed showing his son “the ropes,” and used these times to perfect his own roping abilities as well. He rodeoed in the team roping event.

When Dusty was a freshman at Havre High School, he wanted to compete in rodeo, but the school did not have a rodeo club. His dad came to the rescue and started one. From then on, the family’s old yellow Chevy announced Jack, Patti and the kids’ arrival to the various high school rodeos.

His abilities earned him a rodeo scholarship at the college level, first at Dawson Community College in Glendive and then at Northern Montana College (MSU-Northern) in Havre.

During his time at Northern, Dusty became a member of the Northern Rodeo Association (NRA), eventually joining the Professional Rodeo Cowboys Association. He also earned a degree in ag business.
Dusty’s membership with the PRCA continued for 15 years during which he also held a regular job and worked a side business buying, selling, and hauling hay.  Dusty is no stranger to hard work; he willingly looks it straight on and gets to it.

A young family made “running the roads” a more difficult pastime to continue, so Dusty quit rodeoing by 2004. He had married the former Tonya Barron Solomon and the two moved to Stanford, where they have raised two boys, Jake and Zack. When school resumes a few weeks from now at Stanford High School, Jake will be a senior and Zack will be a sophomore. Tonya is employed at Stockman Bank in Stanford and Dusty has worked for Triangle Communications since 1999.

Always looking to improve himself and his circumstances, Dusty attended the Western College of Auctioneering, where he took a 92-credit hour course that prepared him for auctioneering. Today he lends this expertise for fundraising purposes.  He also operates a Skid Steer service.

One never idle – always having something going on the side, Dusty began buying yearlings in the fall, feeding them out and selling them in the spring, this shortly after moving to Stanford.

According to Tonya, this last side business, as well as his ranch upbringing, “hooked him,” and today, with his family’s help, Dusty is raising his own herd of cows.

He continues membership in the Stampede Club, this year marking his 18th year with the organization, and he still has his hands in the rodeo, serving as the arena boss since 2005. Rodeo is a Solomon family tradition: Grampa Ed was a pickup man for Kesler Rodeo and his son Jack was also a pickup man. Dusty’s son Zack started bull riding this last spring.

Interestingly, Dusty’s Great-Great-Grandmother Redwing was a horsey person in her own right: although she did not compete in rodeo, she rode horses, sidesaddle no less!

The 54th C.M Russell Stampede is deservedly dedicated to Dusty Solomon. Thanks, Dusty, for all you do for the Stampede Club and for the success of the rodeo.
CM Russell Stampede - always the third Sunday in July!  Stanford, Montana