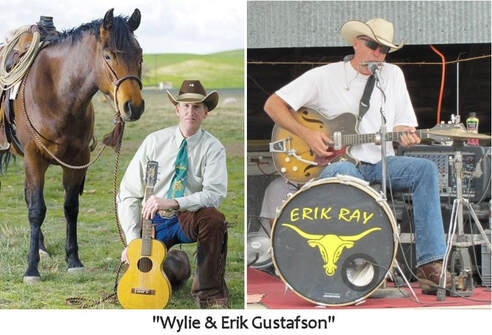 The well-known musicians will be performing together for a rare entertainment event at the CMRussell Stampede in Stanford, Montana. Most folks have heard at least one of the Gustafson brothers perform. But it’s an unbelievable treat to hear them when they team up. Both grew up on the family ranch near Conrad. Wylie, a singer/songwriter has 22 albums and 3 decades of performing, writing, and recording under his belt. His western lifestyle and the recording studio are inseparable. He is a famous yodeler; and well-known for his “Yahoo” yodel. Wylie is also an accomplished cutting horse and rodeo enthusiast.

Wylie and Erik learned music at an early age, from their father, Rib, who would entertain them and their two siblings by singing, yodeling, and playing his Epiphone guitar. They played in a band together, while going to college. They have traveled in separate paths in their musical careers. However, they will putting on a great show on the 17th. The opening act will feature a mixture of local talent. It should be noted that thanks to a large group of music sponsors; there will be no charge for the CMR Stampede music entertainment at the Stanford fairgrounds at 3:00 p.m. on July 17. It should also be noted that Wylie and Erik will be playing at the street dance, downtown Stanford, that evening.